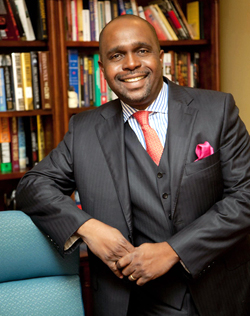 Dr. Temisan L. Etikerentse is a Board Certified Internist born on March 15, 1969 in Lagos, Nigeria. He received his medical training at the University of Lagos and graduated with an MMBS degree in 1991. In January of 1995, he moved to the United States after being accepted at Michigan State University Associated Hospitals. He completed his residency in Internal Medicine in 1998, after which he joined a private practice and worked in Pageland, SC for approximately 3 1/2 years.

In May of 2002, Dr. Etikerentse started Hope Clinic in Moncks Corner, SC. The practice currently has a second location in North Charleston, SC. In addition, he works as a hospitalist at both Trident Regional Medical Center and Summerville Medical Center, both of which are located in the Charleston tri-county area.

Dr. Etikerentse lives in Mount Pleasant, SC and has been married for the past 15 years to his beautiful wife, Ijeoma Etikerentse. They are blessed with five children.